Once upon a time, the Most Serene Republic of Venice was a majestic and innovative maritime power that soared above all others as it ruled the high seas for over 1,000 years. She was the unquestioned leader in trade between Europe and the Orient, and bridged the social, political and cultural divide between the two geographies.

Cicchetti and an ombra at a Venetian bacari 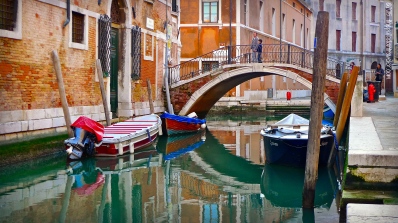 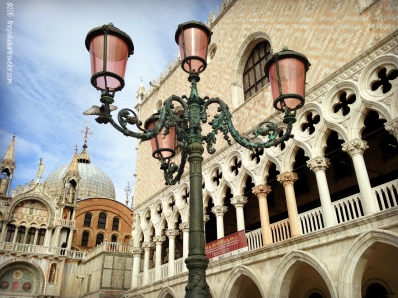 Today, La Serenissima is world renowned for her many bridges and canals — revealing postcard-perfect scenes around every bend and across every expanse — her priceless art and stunning architecture, and the twice-daily, anonymous Venetian ritual of cicchetti (small appetizers) and an ombra (glass of wine) taken in a back-alley bàcari (bar). But, most importantly, it is Venice’s ability to simply take your breath away, without warning, regardless of how many times you’ve visited her. 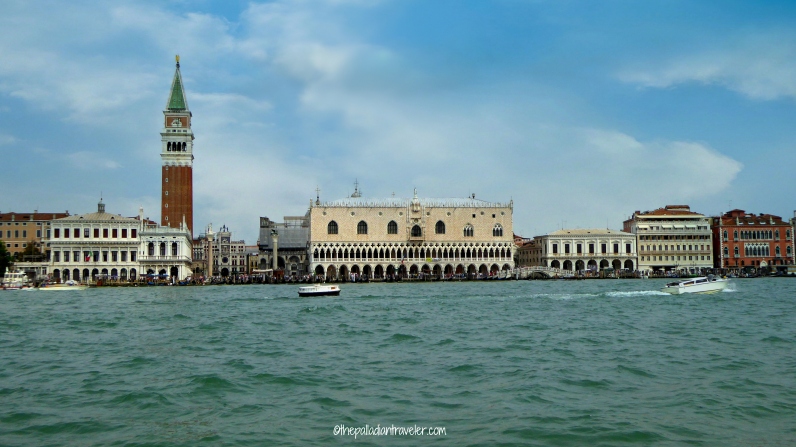 No stranger to the City of Canals, I’m about to see her in a new light — from way above the crowds down to eye-level with their footwear — as I, together with fellow blogger Orna O’Reilly and five paying customers, meet up with Jennifer, one of Walks of Italy‘s (WOI) local expert guides, board a luxury motoscafo (motorboat) at the pier near Palazzo Ducale and shove off on WOI‘s intimate tour: Venice by Boat and Tower Climb. 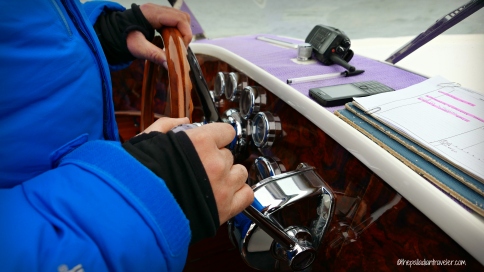 While Marco, our pilot, steers the sleek, white craft across St. Mark’s Basin, past Canale della Giudecca and towards Isola San Giorgio Maggiore, Jennifer points out that, “Few visitors take the time to visit this island, and that’s their loss as you’re about to find out.”

One of Venice’s most photographed islands, we alight onto San Giorgio Maggiore for the “climb” portion of our two-hour tour.

“This is the Church of San Giorgio Maggiore,” Jennifer announces,” a Benedictine basilica designed by High-Renaissance master builder Andrea Palladio that was constructed between 1566 and 1610.”

Its brilliant white marble exterior reflects down into the blue water of the Venetian Lagoon, and serves as the iconic focal point for some of the more than 20 million annual visitors who “body massage” their way along the Riva degli Schiavone while gazing and aiming their cameras and iThingies out to sea.

Inside, Jennifer points out the art and architecture of this exquisite house of worship, including the original protectorate angel that stood atop the basilica for centuries until it was struck down by lighting.

And, not to be missed are two 16th century capolavori (masterpieces) by Jacopo Tintoretto, the energetic Renaissance painter know as Il Furioso (The Furious): The Last Supper and The Fall of Manna. 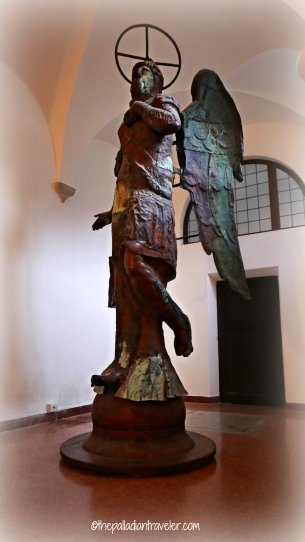 “The church’s campanile (bell tower),” intones Jennifer, “has a ring of nine bells in C♯, and its architectural style mimics that of the tower just across the way in Saint Mark’s Square.”

From the belfry, reachable on foot or via an elevator, you’re treated to incredible bird’s-eye views of La Serenissima. Trace the route of the Grand Canal, marvel at the dome of St. Mark’s Basilica and be surprised by the well-manicured labyrinth just down below. Armed with a camera, you can get off some memorable shots of Giacomo Casanova’s hometown.

The “climb” now over, we’re back onboard the motoscafo for the “glide” portion of this WOI excursion.

“Built entirely over water,” Jennifer states, “Venezia sits atop an archipelago of 118 small islands in a shallow lagoon that empties into the Adriatic Sea.”

Separated by an assortment of canals, like the Grand Canal (called Canalasso in the Venetian dialect) — the iconic waterway that slithers through La Serenissima like a giant S-shaped serpent — smaller ones called a rio that merge into the bona fide ones, and the narrowest and shortest of canals called a riello, Venice truly is the City of Canals.

“La Serenissima‘s connected by more than 400 bridges, some architectural masterpieces, and all are negotiated free of charge on foot,” Jennifer announces through our radio receiver ear buds — standard issue on a WOI tour.

She adds, “You can float around Venice, too, via inexpensive traghetti (two oar gondolas) and vaporetti (public ferries), or expensive gondola rides and private motorboat taxis, just like the one we’re enjoying.”

During our “glide,” we head into the back-waters of La Serenissima and collectively inhale as we negotiate some very narrow waterways and duck our heads as we barely clear a few low-arched bridges that you can almost touch as you pass by underneath. 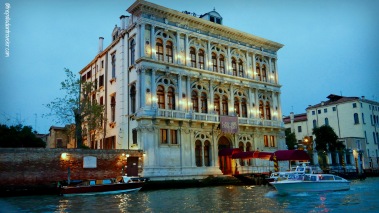 Making our way up the Grand Canal as daytime begins to give way to nighttime, we navigate past luxurious palaces like Cà d’ora, Cà Pesaro and the Casino, glide underneath the iconic Rialto Bridge and slowly make our way back to GO: the pier, just below Palazzo Ducale, with its fab view out to Isola San Giorgio Maggiore.

As we disembark, we thank Jennifer for a job well done. Her superb narration, sprinkled with historical footnotes, funny anecdotes and insider information that only a local can provide, made this two-hour, high climb-low glide tour around the City of Canals a real treat.

IF YOU GO: To book this or one of the other eight leisurely-paced WOI Venice tours, just click HERE.

And, your scenic and informative strolls don’t end in La Serenissima, as WOI offers a host of immerse-travel walks in and around Rome, Vatican City, Florence, Milan, Tuscany/Siena and Pompeii/Amalfi Coast.

BUON VIAGGIO and BUONA PASSEGGIATA with Walks of Italy, of course.

The Palladian Traveler’s participation in this tour was supported by Walks of Italy, which didn’t review or approve this article before publication.