One of the nice things about being a LAZY person is that you can let your supplies dwindle down to a precious few before you really have to shower, dress and actually go outside to the grocery store or market, or both, to stock back up.  So, did I shave, shower, and go outside to prep for this recipe? I cannot tell a lie. I DID NOT.

Let’s take a quick inventory of what’s inside the ice-a-box.

A packet of boneless pork loin chops. A half-carton of heavy cream. A half-bag of frozen and cut rosemary potatoes. A few cloves of garlic. Butter. Olive oil. That’s it? Nothing else? OMG! I am LAZY.

Well, let’s put that frustration on the “back burner” and deal with it later.

So, I’ve got less than a suitable amount of ingredients to mount a worthy assault in the kitchen. But, if I could just find two additional ingredients, I could get this show on the road. Let’s see. Do I have any French Cognac brandy? Nope. Any Madagascar peppercorn? Of course not. Wait a minute, I can always substitute the cognac with something else from the booze bin and my fresh pepper grinder can take the place of the peppercorn.

Okay. I’ve got it. I’ll finish off the pork loin chops in a liquor-laden cream sauce and throw some whole garlic cloves in with the taters while they roast. Let’s call this culinary creation the Lazy Person’s Pan-Seared Plum Brandy Pork Chops. I’m getting hungry. 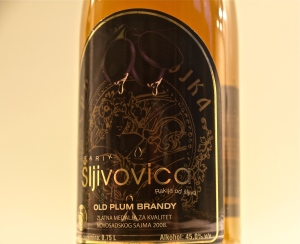 Know what Slivovitz is? It’s a distilled beverage made from Damson plums and is widely known as plum brandy.

Slivovitz, or Sljivovica in Polish, which is where my bottle of elixir comes from, is considered the national hard liquor drink around the Balkans down to Turkey and is widely produced and consumed in most Central and Eastern European countries.

A full shot glass of Slivovitz will serve as the substitute for the preferred French Cognac brandy. živeli! (Serbian for “Cheers!”)

If you’ll hand me that apron and the bottle of Slivovitz we can head into the galley and start slinging some hash.

8 Garlic Cloves with skin on and separated 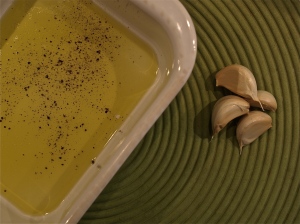 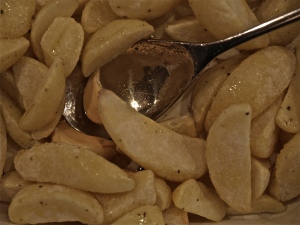 Step-4: Add 1 tbsp each of olive oil and butter to skillet, set on MED-HIGH heat, let melt and merge then introduce pork loin chops for 4 min. 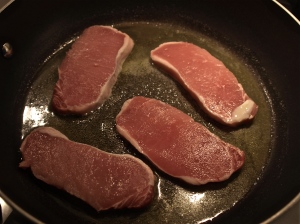 Step-5: At 4-min. mark of searing in skillet, pork loins should be paper-bag brown in the center and golden brown around the edges. Turn chops over and continue searing for another 4-min. 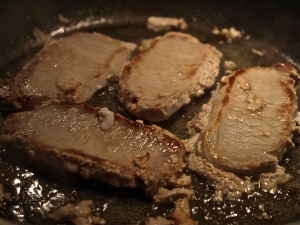 Step-6: At the 8-min. mark of searing, the pork loin chops are ready. Remove chops from skillet, lower heat to MEDIUM, add the plum brandy and stir liquor with the pan drippings until the alcohol has dissipated, about 30-45 sec. 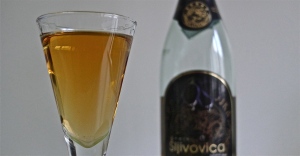 Step-7: Pour in the heavy cream, add the freshly ground black pepper and mix vigorously for about 1-min. 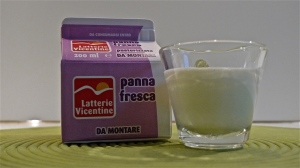 Step-8: As the creamy mixture starts to firm up, turn heat to LOW, reintroduce pork loin chops and move them around, side over side for about 30-sec. 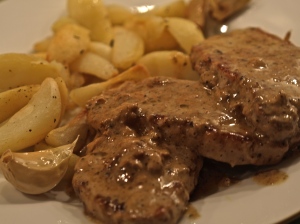 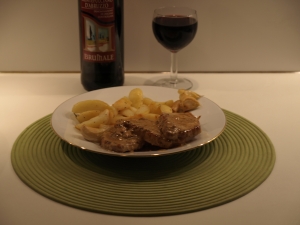 Recommended Wine Pairing: Montepulciano D’Abuzzo DOC – Produced by Bramale Vineyards and bottled by Cantina Caviro, Forli (FC), Italy – Just one sip and you’ll do what locals have done for years: fall in love with Montepulciano D’Abruzzo. A blend comprised of 85% Montepulciano and 15% Sangiovese grapes, this fruity, but dry, deep Italian red is quite reliable. This Montepulciano D’Abruzzo pairs beautifully with a variety of meat dishes, especially those in sauces, and, above all, it’s the perfect partner with lamb. For the complete review just click right here, GOOD WINES. 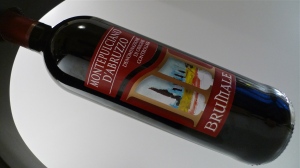 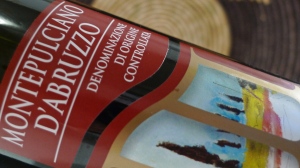