Isolated from the rest of Planet Earth by time, distance, oceans and the Aussie penchant for Vegemite, Australia, the land “Down Under,” still managed to beckon approximately 8.8M international visitors to its faraway shores last year to bask in its endless sunshine and experience its diverse environment: the rugged Outback, tropical rainforests, mountain ranges, postcard-perfect beaches and its amazing wetlands, like the Noosa Everglades, one of the Sunshine Coast’s main draws. 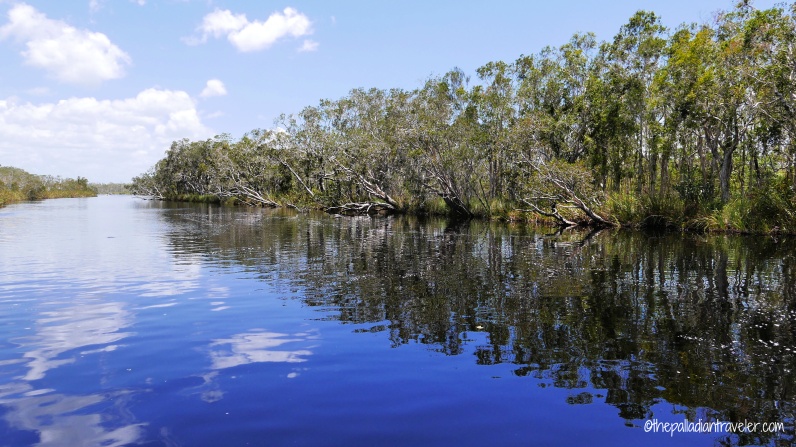 Just a leisurely, one-hour scenic drive up the Sunshine Motorway from our home base in Maroochydore, Orna O‘Reilly, my significant other and fellow travel writer, and I arrive at Habitat Noosa, the entryway into the Cooloola National Park and its UNESCO Biosphere Reserve, where we board a state-of-the-art pontoon boat, with large open viewing windows, for our award-winning, half-day eco wilderness cruise deep into the Everglades. 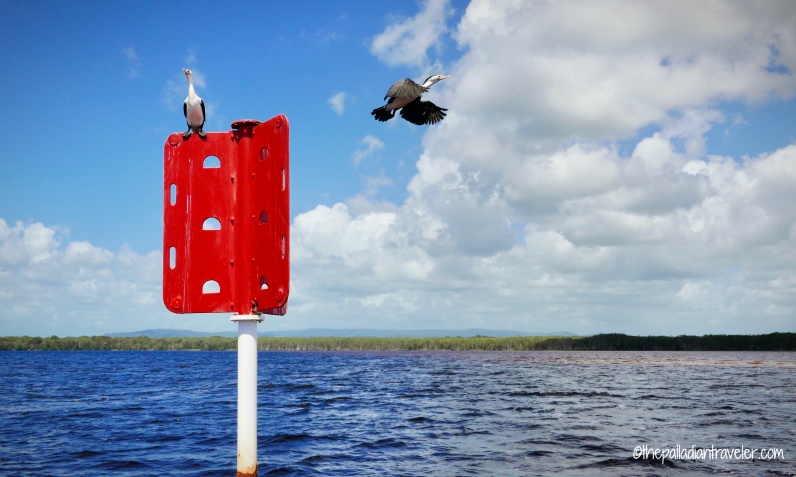 Leaving Habitat Noosa in our rearview mirror, we jet across the brackish waters of Lake Cootharaba –– the tannins from the tea tree turn the water to a rust-brown color –– until Heine, our transplanted South African skipper/narrator/environmentalist, pulls back on the throttle and we begin our quiet glide up this section of the Noosa River, aptly named the “River of Mirrors.”

“One of only two everglades systems in the world, the other’s in Florida,” Heine intones over the on-board speaker system, “this waterway is the ultimate in serene tranquillity.” Skipper Heine adds, “Over 44 percent of all of Australia`s bird species reside within this eco system, along with 1,365 species of plant life and 700 native animals.” 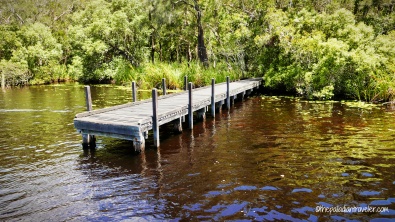 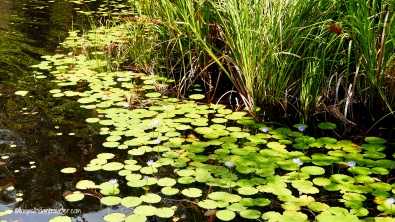 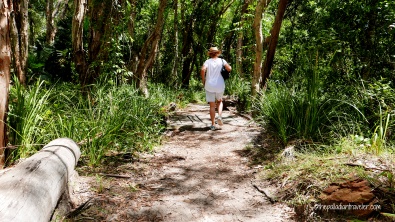 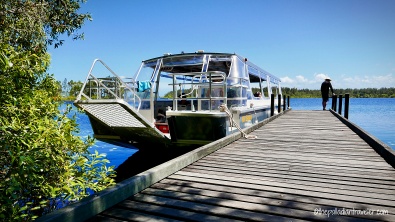 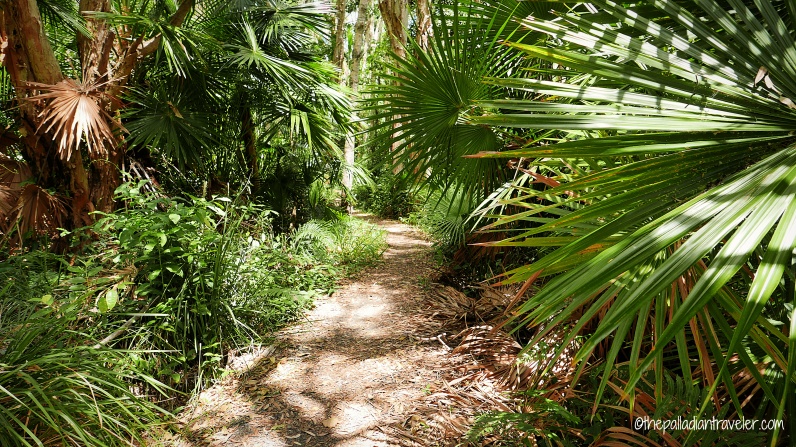 A world of water, wilderness and wonder, Heine pulls the craft alongside a wooden dock and invites us to disembark for a short stroll (500m) into the ‘glades to get a real feel for the wetlands. Cicadas immediately come alive as we make our way down a rustic footpath, shaded by swaying palm trees and overgrown ferns, while the occasional warble can be heard overhead from one of the indigenous birds calling out to a feathered friend. 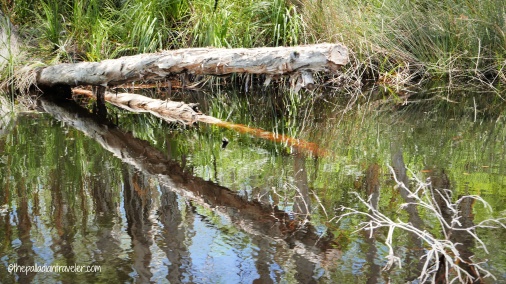 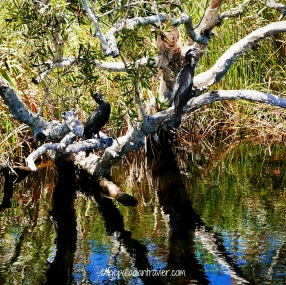 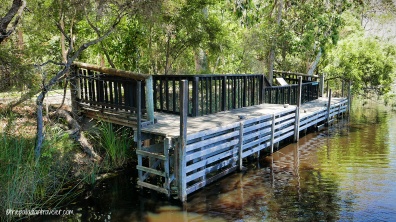 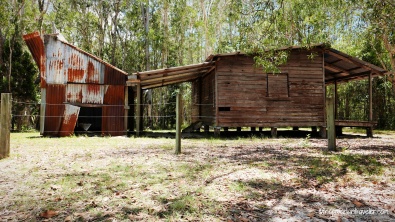 Back on board, our glide continues through the narrow and pristine waterways past more magnificent flora –– banksias, tea trees, melaleucas, reeds and water lilies –– more long-beaked birds on branches, a few canoers and kayakers and a couple of skinny dippers, who really don’t seem to mind the intrusion, until we come to a full stop for morning tea at an historic logger’s camp. The cookies and sweet slices of watermelon suited me just fine, followed by a stroll over to Harry’s Hut, a relic from the early timber cutting days in the Everglades, saying “G’day” along the way to a slow-moving monitor lizard. 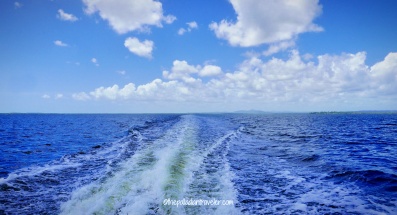 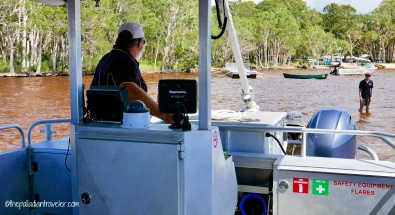 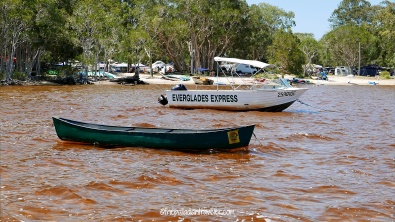 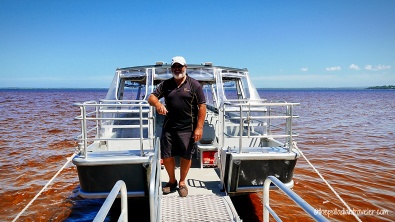 All present and accounted for, Heine puts pedal to the metal and we race back across Lake Cootharaba until we return to Habitat Noosa just in time for lunch on the veranda at the CootharaBAR Bistro. 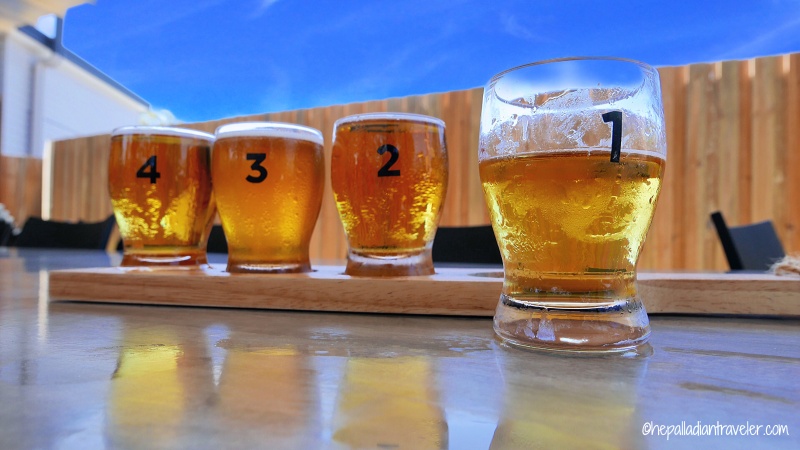 On the menu, succulent slices of roasted pork along with all the fixin’s that are sourced from local produce. And, in the glass? A “paddle” of six taster-size glasses, one each for the half-dozen artisan beers brewed on site by the Eco Brewing Co. According to my taste buds, the Everglades Lager takes “best in show” honors. 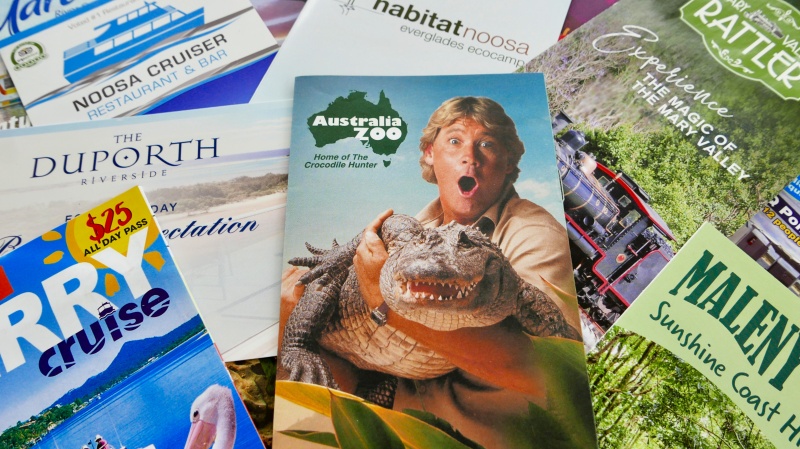 The eco wilderness cruise around the Noosa Everglades, a wetland of international importance, will be a hard act to follow as our discovery of Australia’s Sunshine Coast continues. Where to next? The late Steve Irwin’s legacy to animal lovers everywhere: the Australia Zoo, where we’ll hang out with ‘roos and wallabies and have a stare down with a wide-eyed, ring-tailed lemur. Crikey!