Bell towers around the “City of a Hundred Spires” ring out in unison that it’s now 5:30 p.m., the exact hour and minute that Insight Vacations‘ Bohemian Rhapsody journey officially begins for a handpicked group of international travel writers, bloggers, social media experts and photographers invited over to where central meets eastern Europe to experience the jewels of the old Habsburg Empire: Prague, Vienna and Budapest.

Pinching myself to make sure that this is not a dream — It’s for real, whew! — I start pressing the flesh with the newly-formed “band of merry media” as it begins to take shape in the lobby of Prague’s Art Nouveau Palace Hotel for Act I of what I hope will be an incredible week of live theatre starring the sights, sounds and savors of Bohemia.

The ice breaks clear in a matter of seconds as journalists and lens crafters from the US, Canada, Ireland, the UK, South Africa, Indonesia, Malaysia, Hong Kong, the Philippines, Australia and New Zealand quickly get acquainted and head straight away for the Insight motor coach, skippered by Karoly, our Hungarian driver, and parked just outside on the cobble. 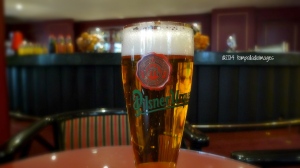 Well, with the Czech Republic boasting the highest per capita consumption of beer annually — around 40 gallons or 160 liters per citizen — it’s only fitting that Insight jumpstarts this Bohemian Rhapsody at a brewery, right?

A scenic ride through the Old (Staré město) and New (Nové město) districts of Prague up to the hilly Strahov section of the city, with historical footnotes of Praha’s past — like, defenestration (the art of throwing a political foe through a perfectly functioning glass window) — doled out in rapid fire by Neira Milkovic, Insight’s central and eastern Europe tour director extraordinaire (she chats it up in eight languages by the way, including her native Croatian), our 40-passenger, business-class legroom Mercedes coach comes to a full stop outside an ornate archway fronting the Strahov Monastery.

Walking down off the bus — not hurled through one of the windows — we collectively grab our camera gear and, suddenly, our band of merry media transforms into a pack of wild paparazzi on the loose. It’s every man/woman for his/her self.

Oh, I just love these media familiarization trips; so much fun.

Through the archway, we enter the sacred grounds of the Strahov Abbey of the Royal Canonry of Premonstratensians, a Roman Catholic order of monks founded by St. Norbert in 1120. It is here, above Prague, that the order put mortar to stone and built its heavenly monastery in 1143.

The centerpiece of this religious institution is the Basilica of Our Lady of the Assumption, where Mozart once put the house of worship’s pipe organ through its paces.

So, what does an order of monks have to do with the Czech Republic’s signature beverage? Well, it was these same Premonstratensians who, in between vespers, began turning hops into beer in a makeshift brewery all the way back in 1400. 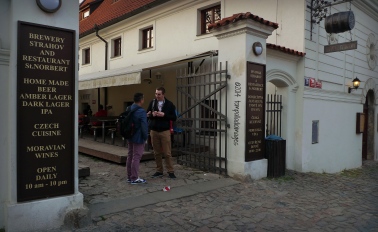 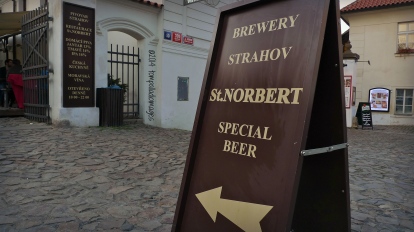 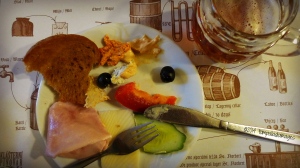 A true Insight “signature” moment — one of many that will be sprung on us without notice — our band of merry media went behind the scenes of the brewery then put fork to food and hand to mug. To add insult to injury, our waiters tossed in a few complimentary shots of Becherovka, a smooth herbal liqueur. Na zdraví! (Czech for Cheers!).

We went through the gates of the saintly brewery as the sun was setting over the city and came out, still able to walk a straight line, as night took over the scene, to head down to Hell — actually a wine-cellar restaurant name Peklo (Czech for Hell) — for part II of this epicurean icebreaker on Insight’s euro. Along the way, we got off some shots of the fabulous panoramic views of Prague and a few illuminating frames of the monastery.

Down the steep steps we travel into the bowels of “Inferno.”  Peklo, a wine-cellar restaurant that occupies the space of a 12th century grotto, lies directly underneath the monastery grounds.

Beer mugs are exchanged for wine glasses and there’s plenty of grape to handle this band of merry media. I get the initial pour and taste a Czech Sauvignon, and it’s inspiring.

Taking my place in the buffet line, I forgo the sliced-to-order roast beef and, instead, indulge in the freshest smoked salmon I’ve ever tasted along with a multitude of vegetables prepped in a variety of ways. Dinner’s final act is a delicious slice of apple strudel drizzled with a creamy vanilla sauce. Mmm.

If this is Hell, then sign me up for the long haul!

For complete information on Insight Vacations’ premium and luxury-escorted itineraries, including the Bohemian Rhapsody and 100 other journeys throughout Europe, just click HERE, or call toll free 1-888-680-1241, or contact your travel agent.

Join me tomorrow at first light as Prague rubs the sleep from its eyes while I do my best to get the red out of mine.