Queen Mary I of England struck fear in the hearts of her subjects as Bloody Mary. 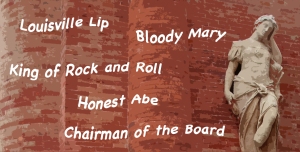 Elvis, before and after he left the building, was and always will be the King of Rock-and-Roll.

Muhammad Ali, f.k.a Cassius Clay, was given the hometown moniker of Louisville Lip early in his boxing career.

And, during his heyday, Frank Sinatra roamed the Las Vegas strip as the Chairman of the Board.

Whether you’re a boxer, a rocker, a president, a crooner, a queen or a John/Joan Doe, your soprannome (nickname) tells almost as much about you as the genetic instructions found in your DNA. 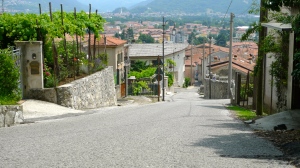 Never is this truer than in Piovene Rocchette, a former Roman control post along the road towards Tirol that sits in the foothills of the pre-Alps, in the province of Vicenza, Italy.

It’s a small municipality of just under 8,500 curious onlookers, where the art of giving most locals, or even entire families, a nickname that brands them for the rest of their lives is brought to new heights. 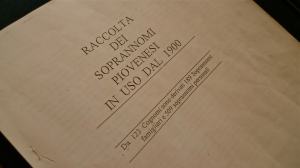 The city hall published some years ago a detailed list of all of the nicknames – familial and personal – that have been in use since 1900. This list notes 189 family nicknames and 509 personal nicknames.

For instance, an unkempt man who lived up in the hilly part of town, and not very good at keeping his house clean, was affectionately referred to as Maiale sciolto in cucina (Pig loose in the kitchen). 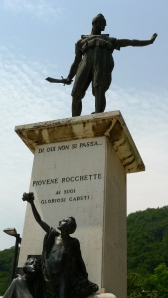 My dearly departed brother-in-law, Attilio, who stood head and shoulders above practically everyone else in town, was nicknamed Di qui non si passa (From here no one passes) after the inscription of the same chiseled into the monument that stands in the town square honoring those who served in the “War to end all wars.”

Maria, who, along with her entire family, immigrated to Canada, returned home alone after ten years abroad and was warmly and immediately christened Maria Canadese (Canadian Maria).

As the lone Yank who lived a spell in postal code 36103, I was simply called l’Americano (The American).

Personally, I would’ve preferred a moniker a bit more creative, graphic, or endearing, but the townsfolk dubbed me l’Americano and I ran with it.

Admittedly, George Clooney I’m not, but I managed to fit right in. 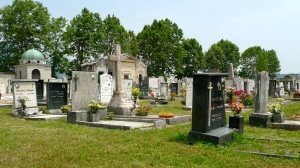 On frequent strolls through Piovene Rocchette on our way out to the cemetery or just around town – that’s what people do for fun on Sundays after lunch in small bergs here in Italy – Maria Canadese would point people out — those we would pass on the street, their house or apartment where they lived, or during a pause at a graveside — but only by their soprannome: 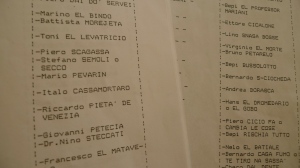 Merlo (Blackbird, due to the man’s pronounced nose and fidgety head).

Marco Orto (Mark Garden, the the greengrocer down the street).

Papa Grappa (Father Grappa, the monsignor at the parish church who enjoyed wetting his whistle).

Ciodi (Nails, who owned and operated the local hardware store). 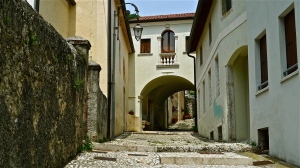 During the week, I would commute to Vicenza and leave the house right on schedule at 7:30 a.m. Right on schedule, too, was Beppe Testa — a close friend of my suocero, (father-in-law) Guido — who always made his way by our house at the same time as I was pulling the car out, meandering up Via Liberta’ for his daily constitution at the local bar.

I’d always roll down the window, wave and say, Buongiorno Signor Testa (Good morning Mr. Testa). He’d smile, wave back, but give me a confused look like he didn’t recognize me.

The Joke’s on Me 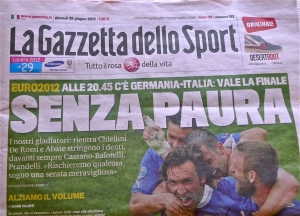 Most evenings when I returned home from work I’d find suocero Guido at the kitchen table engrossed in his daily “bible” reading — the pink pages of La Gazzetta dello Sport (The Sport Gazette).

Before heading upstairs to our apartment, I’d pop in, spend a few minutes with him, maybe have an ombra (wine aperitif), and get the latest lowdown on Inter Milan, his beloved squadra di calcio (soccer/football team).

One particular night, I mentioned to Guido that I saw his old friend, Signor Testa, that morning. 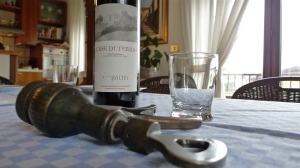 “Your old friend, Beppe,” I replied.

“Ah,” Guido chuckled, “his real name is Giuseppe B. We call him Beppe Testa because he has such a BIG head (testa).”

Quickly realizing my gaff, I chuckled, too, unfortunately, at Beppe “Big Head’s” expense.

So, what’s the nickname you were given as a kid and carried with you all your life? Care to share what’s in your folksy DNA?