Any travel writer worth his or her salt cannot come to Ireland and limit their reporting to just the “usual suspects” of foamy pints of Guinness, Dublin’s Temple Bar, the postcard-perfect scenery in various shades of verdant green, the iconic locales and The Quiet Man film locations. No, to document the Emerald Isle correctly, you’ve got to, unfortunately, sprinkle a bit of sadness over the narrative. 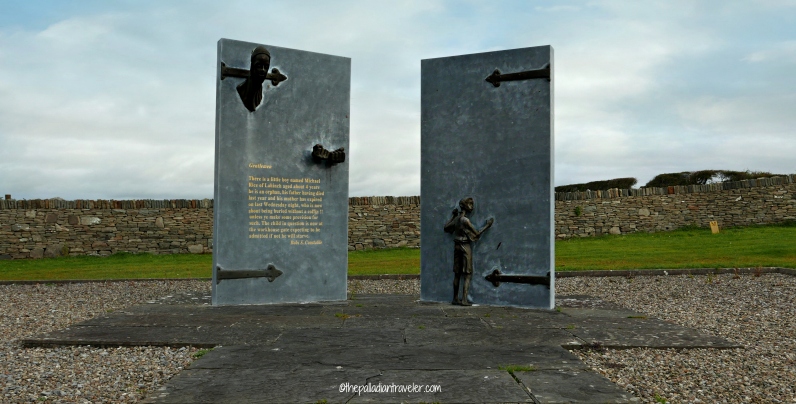 About an hour out of Limerick along the N67, Eugene, our expert pilot, brings the motor coach to a full stop at a lay-by just outside of Ennistymon on the way to Lahinch in Co. Clare. The “band of [not-so] merry media,” 18 travel writers and photographers invited by Insight Vacations to sample a portion of its Treasures of Ireland journey, disembark and walk solemnly into Ireland’s tragic past: An Gorta Mor (The Great Famine).

The very first monument erected in Ireland to memorialize the approximately 1 million victims of the island’s great potato crop failure, who either died of starvation or disease-related causes between 1845 to 1852, and which also forced an additional 1 million Irishmen to emigrate to faraway shores, The Great Famine Memorial was dedicated on August 20, 1995, marking the 150th anniversary of the tragedy that changed the Emerald Isle forever.

Located across the field from Ennistymon Hospital, itself built on the grounds of a local 19th century workhouse, the memorial was designed by Allan F. Ryan Halls, an artist from Co. Kerry. The sculpture, on one side, depicts a child standing before the workhouse door, while across from that is the head of an anguished mother and two hands clenched in frustration above the sorrowful text of a pleading note written on February 25, 1848:

For this writer, three generations removed from my Irish roots, a brief pause along the side of the road to view this memorial is the very least that I can do to begin to try and understand the pain and suffering my ancestors endured during An Gorta Mor. May they rest in peace.