It’s an Edward Bulwer-Lytton kinda morning, not night — dark and stormy — as the intrepid “band of merry media,” 18 travel writers and photographers invited by Insight Vacations (Insight) to sample a portion of its Dalmatian Riviera itinerary, batten down the hatches on our sleek motor coach while the strong Bora wind blows and heavy rain pelts our ferry boat, bobbing and weaving in the Adriatic, as it navigates away from the island of Korčula and heads to nearby Orebić on terra firma. 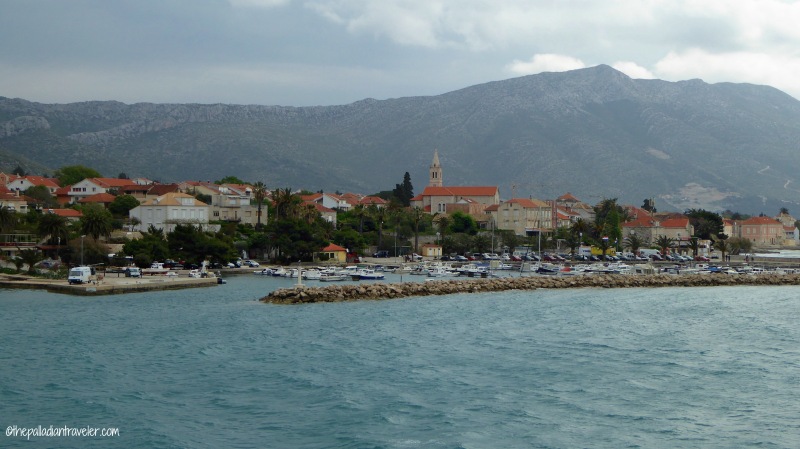 When I received my invite to board this eight-day Insight journey it read: “Experience the sun-drenched Dalmatian Riviera.”

Not this day, my friend.

But, hey, nothing’s perfect and a bit of inclement weather won’t dampen our spirits as we cruise southward across the scenic Pelješac Peninsula via the historic and reconstructed Napoleon Road.

Covered in evergreen vegetation, Mediterranean plant life, fruit trees, olive groves and vineyards, this route, built by Emperor Bonaparte two centuries ago, today is one of Croatia’s impressive wine roads as our business-class legroom coach comes to a full stop alongside Vinarija Vukas, the Vukas Winery, at the top of a hill in the village of Ponikve.

The plaque on the main winery wall tells it all, Doktor Vina (Doctor of Wine), as Dubvrako “Doc” Vukas, the co-owner of the 60+ year-old, family-run estate, wastes no time and quickly introduces us to rakija, a brandy made in a variety of flavors that’s the national firewater all across the Balkans.

“We use it as an aperitif,” our host tells us, as we queue up and pick our fruit-flavored potent potable. I select lemon. It goes down smoothly warming my insides, then suddenly explodes. Whoa!

Cultivating only Plavac Mali — the “little blue” love child of Zinfandel and Dobričić grapes — the wines that emerge from the Vukas estate are robust, to say the least.

Along with nibbles of local cheese and homemade bread dipped in the estate’s extra virgin olive oil, we sample a trio: the white Rukatac (13.1%) and the reds Mato (15.1%) and Plerej Grand Cru (16.2%). 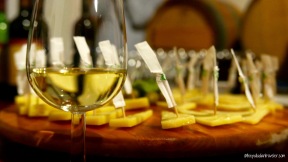 Wine and cheese tasting in Croatia 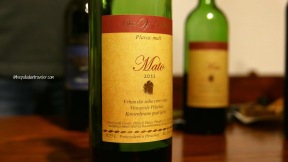 Heads a bit cloudy, like the weather outside, we bid farewell to our affable host, clamber back on board the motor coach and head further south along the Adriatic Highway, stopping just short of the Most dr. Franja Tuđmana (Franjo Tuđman Bridge) for a quick photo op.

The bridge, named in honor of Croatia’s first president, is a 518 meters-long, cable-stayed expanse that crosses the Rijeka Dubrovačka inlet at the Port of Gruž, just outside Dubrovnik. 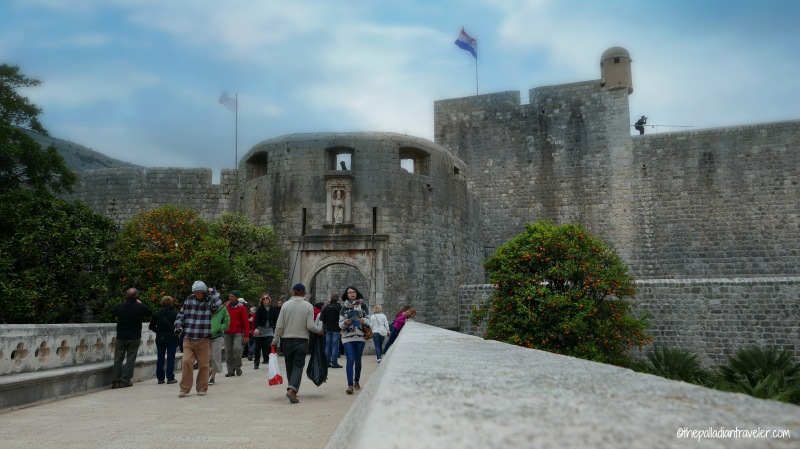 Across the bridge we go, passing by oversized cruise ships and ferries until we come to a full stop just outside Pile Gate, our entrance into Dubrovnik’s Grad (Old City), a UNESCO World Heritage Site AND the make-believe King’s Landing for the hit television fantasy-drama series Game of Thrones.

Met by Ida, Insight’s expert local guide sporting a bright, canary-yellow raincoat — easy to follow in a crowd — we’re taken on a quick, one-hour orientation of the Grad.

A remarkably well-preserved, late-medieval walled city, Dubrovnik has a regular street layout on the flat — all paved in marble — and narrow alleyways that climb, and climb and climb.

Showcasing Renaissance and Baroque architecture, it’s hard not to be in awe over the sheer beauty and atmosphere that is uniquely Dubrovnik. 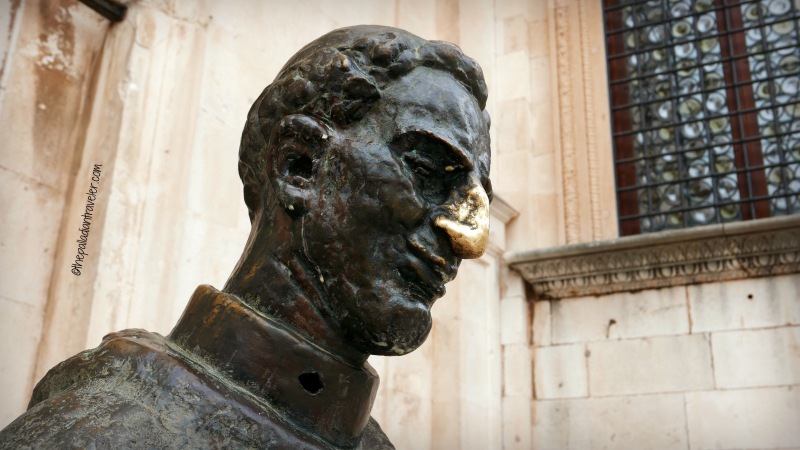 Magnificent fortifications, monumental gates, the 11th century Rector’s Palace, the 14th century Franciscan Monastery, the rebuilt Cathedral of the Assumption, Onofrio Fountain and the statue of 16th century playwright Marin Držić, the so-called Croatian Shakespeare — rub his nose and it just might bring you good luck — are just a few of the jewels tucked inside the walls of this captivating city. 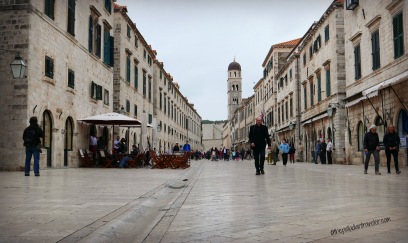 Our stroll around town ends at the entryway of the ornate, 16th century Sponza Palace where we’re greeted by members of the Dubrovnik Tourist Board for an early-evening aperitif of sparkling Prosecco.

A rectangular building with an open-air courtyard and a loggia, the palace, formerly the Customs House, today serves as the city’s archives.

If you’ll grab a flute, let’s have a look around. 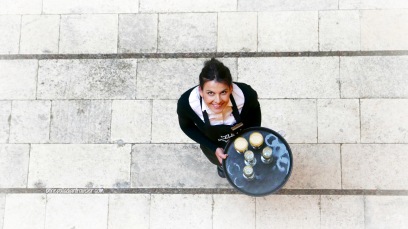 Insight likes to spread the wealth around whenever it blows into town. That’s why sometime on every journey it randomly divides its guests into small groups for a “dine around” to a selection of local eateries. 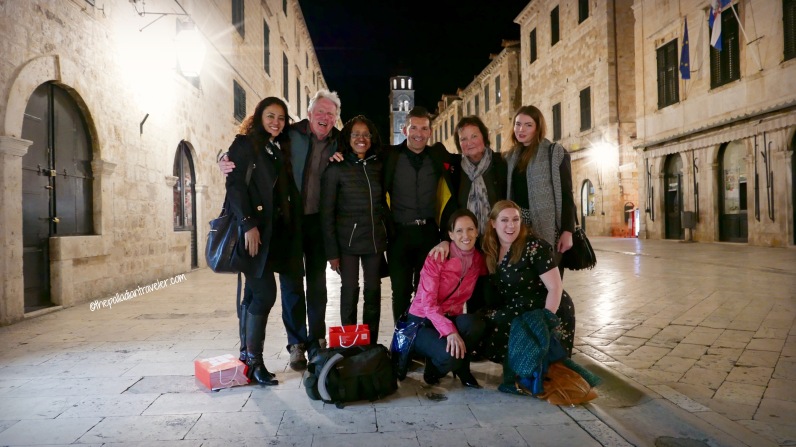 My party of eight hits the shiny marble pavement and makes its way to Konoba Dalmatino, an upscale, “slow food” tavern, where we get to choose our three-course feast a la čarte.

Given Dubrovnik’s location overlooking the Adriatic Sea, I must order fish. And I do. 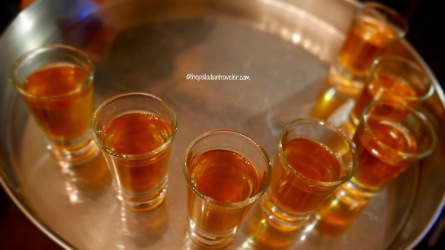 A starter of marinated anchovies, smoked swordfish and shrimp. A main course of skewered squid and prawns. For dessert, pears marinated in red wine topped with vanilla ice cream, followed by an espresso and a complimentary shot of rakija, a fig brandy popular along the Dalmatian Coast. Živjeli! (Cheers!)

For complete information on Insight’s 112 premium and luxury-escorted journeys around Europe, just click HERE, or call toll free 1-888-680-1241, or contact your travel agent.

Lord Byron, when he first laid eyes on Dubrovnik, described her as the Pearl of the Adriatic and the moniker stuck. I won’t argue with the flamboyant Romantic poet, but Dubrovnik could easily be called the Terracotta of the Adriatic. We’ll find out tomorrow when we climb the Old City’s walls for a view of all those iconic baked-earth rooftops that look out to sea.