When last spotted (I’m always lagging behind), the effervescent band of merry media — 25 journalists and photographers invited by Insight Vacations to sample its Bohemian Rhapsody journey through Prague, Vienna and Budapest — was making its way down the hill from Prague Castle, passing by Saint Wenceslas Vineyard, Bohemia’s oldest, and heading in the direction of Staré Město (Old Town) for a Bohemian crystal glass-blowing demonstration.

To get there, we’ve got to cross the Vltava River, the waterway that separates Lesser Town from Old Town, via the city’s most iconic expanse: the Karlův Most, or Charles Bridge. 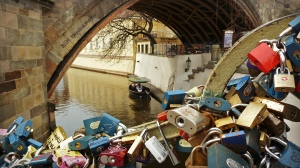 Prior to crossing the bridge, Neira, Insight’s chatty tour director-slash-storyteller, stops dead in her tracks on the cobble of Čertovka (Little Venice) — where tiny canal boats bob up and down in the water below while countless “love locks” cling to the railings above — looks us all straight in the eye and delivers a one-worded warning: “Pickpockets.”

Despite being one of Europe’s safest cities, turns out Prague is crawling with Artful Dodgers straight out of Dickens’ Oliver Twist just waiting for the opportunity to turn one of the best days of my life into a nightmare.

To emphasize her point, Neira explains, “Several years ago I had nearly €4,000 stolen out of my purse right up there on Charles Bridge.” She adds, “Don’t panic, but be extra careful.”

Clutching our bags tightly, as if Fagin and his boys are lurking right around the next corner, our band of merry media makes its way up the stairs and onto Charles Bridge where we merge with the crowd. So far, so good.

Named in honor of Charles IV, the King of Bohemia and later Emperor of the Holy Roman Empire, the Stone Bridge, as it was originally called, began construction in 1357 and was completed in the early 1600s. Stretching 621 m bank-to-bank and 10 m wide, the 16-arched Charles Bridge is protected by three towers, one of which is considered to be the most exemplary Gothic-style civil building in the world.

The bridge is accented on both sides by a continuous line of 30 religious statues and statuaries in predominately Baroque style that were originally erected between the 17th and 19th centuries. Due to floodings and man-made catastrophes (read, wars) over the years, most of the sculptures on display today are replicas of the originals.

One statue in particular, depicting St. John of Nepomuk — he the court priest of King Wenceslas IV who, legend has it, was killed at the request of the king and chucked off “The Chuck” because he refused to tell his royal highness about the queen’s confession — is supposed to bring good luck when touched and guarantees the anonymous traveler a safe return to Prague. And, yes, I touched him and whispered in his ear, too: “Oh, please bring me back to Praha, John of Nepomuk!”

Speaking of falling to one’s death down into the murky waters of the Vltava, in the movie Mission Impossible, partially shot on location in Prague, Jim Phelps, the Impossible Missions Force (IMF) team leader, played by actor Jon Voight, staged his faux shooting death and plunge off the Charles Bridge to the shock and dismay of Ethan Hunt, played by Tom Cruise.

Just as bustling as a movie set, Charles Bridge is filled with tourists, vendors, street artists and performers who occupy the cobble atop the river, and collectively send out an incredible vibe that only enhances this jazzy rhapsody of sights and sounds that is uniquely Bohemian.

Safely on the other side, under the watchful eye of King Wenceslas IV, who stands vigil at the end of Charles Bridge and the start of Old Town, I take a quick inventory of my stuff just to be sure my pockets weren’t picked. Camera bag and gear? Check. Mobile phone? Check. Wallet? Check. Wristwatch? Hey, where’s my wristwatch? Oh, I stopped wearing one a few years ago. Whew!

For complete information on Insight Vacations’ premium and luxury-escorted itineraries, including the Bohemian Rhapsody and 100 other journeys throughout Europe, just click HERE, or call toll free 1-888-680-1241, or contact your travel agent.

Join me in a couple of minutes when we’ll experience a 2,000°F furnace firing up Bohemian crystal, followed by a stroll over to Prague’s Old Town Square to see and hear a 15th century astronomical clock announce 12 bells.