During World War II, American GIs would frequently reply, “For mom and apple pie,” when asked why they were fighting a war so far from home.

The phrase was picked up by print journalists imbedded with the troops and rewritten to read, “as American as mom and apple pie,” and it quickly ebbed into the lexicon of the U-S-of-A.

The phrase took a left turn in the 1960s, dropping “mom” and moving on to where it is today: “As American as apple pie,” an idiom that figuratively describes traditional values within the land bordered by shining seas.

Linguistics aside, apple pie is not uniquely American at all. The timeline’s a bit foggy, but as far as I can tell it was 17th century German immigrants to the New World that imported the apple pie as we know and love today.

When pilgrims took up residence in the Pennsylvania colony, as well as the other original dozen, there were no apples in America, only crabapples. Credit for planting the first apple tree goes to William Blaxton, a British immigrant and Anglican priest, who planted the first seeds on what is today Bunker Hill in Boston back in 1623.  But, it was the hardworking Pennsylvania Dutch, aka Germans, who were prodigious in planting apple orchards across their lands and baking up pies that most resemble and taste like the version that became the cornerstone of the Yankee kitchen.

Just to rub a bit more salt into this epiphany on Betty Crocker’s favorite, the apple itself first sprouted on trees that came out of the ground around central Asia thousands of years ago, then headed west via Egypt, arriving on the European continent by the Romans who spread it, along with the grapevine, across the continent wherever the sandal-clad legions traveled. After that, just about every country in the Old World had its own version of the über apple pie well before the New World took its first bite.

Here in Italy, there’s a baked tart-like apple pie called crostata di mele. The earliest known use of crostata in the Bel Paese dates back to the 1400s. There’s an endless variety of both sweet and savory crostate found in la cucina Italiana, with the sweet varieties eaten at la colazione (breakfast) or as a dessert at the end of la cena (dinner). 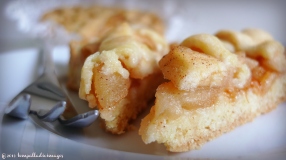 Along with fresh apples, sweet crostate can also be filled will a variety of fruit preserves, typically apricot, cherry, peach, nectarine, or berries. One of the most recent twists on the Italian sweet pie is crostata alla Nutella, filled with that creamy-smooth goodness of the internationally popular hazelnut-chocolate spread.

Crostata di mele, Italian for apple pie and made in Italy. It’s what satisfies my expat craving when I’m occasionally longing for a taste of home.