It’s a nice, crisp, partly-cloudy morning around my neck of the woods; ideal conditions, I’d say, to venture out with my iPhone 5 and tackle this week’s Phoneographic Challege: a study in Black and White. 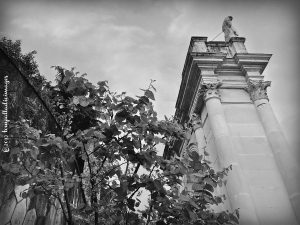 In the Borgo Berga neighborhood of Vicenza’s Centro Storico (Historic Center) stands an architectural project that was commissioned centuries ago by the Republic of Venice and designed by Renaissance master builder Andrea Palladio: Arco delle Scalette (Arch of the Steps).

Part of the greater UNESCO World Heritage site that is the City of Palladio, the Arch of the Steps marks another scenic route up the hill that dominates the scene: Monte Berico and its beautiful Sanctuario della Madonna di Monte Berico.

Designed by Palladio around 1576, construction of the arch began in 1580 and was finally completed in 1595. 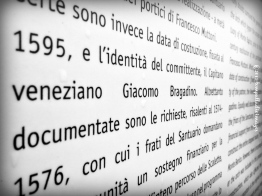 The ornate gateway stands on the very spot where legend has it the Blessed Virgin Mary appeared before a peasant woman, not once, but twice; first in 1426 and again in 1428.

Inspired by the grandiose buildings of ancient Rome, the triumphal arch — nearly completely destroyed during a World War II bombing raid over Vicenza —  is everything one would expect from the master visionary, Palladio. 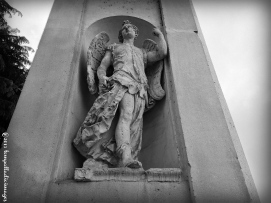 At the top of the arch, sculptured by Giambattista Albanese, stands the Lion of Saint Mark bookended by Carpoforo and Leonzio, two protectorate saints. Inside the two columns of the arch are niches displaying statues of the Blessed Virgin Mary and Archangel Gabriel, both sculptured by late-Baroque period artist Orazio Marinali. 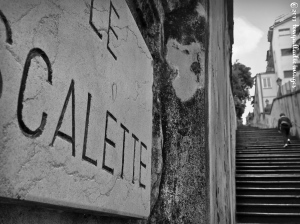 The scalette, 192 steps divided into 32 flights, formed the only hardscape route to the Santuario until the construction of an 18th century, two-section, covered arcade made the hike up to Monte Berico much easier.

Next time you’re in my fair city, or come visit for the very first time, you should give Palladio’s 192-step program a try.

If you occasionally shoot with an iThingie, why not join in the fun and hone your craft. There’s a rotating Phoneography Challenge each and every Monday. For details, visit Sally’s Lens and Pens by Sally.

Until next Monday, let your iThingie be your lens.