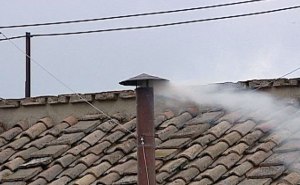 Smoke, the color of a white peace dove, spews forth from a small stack that protrudes out from the roof just above the room where concerned men in their silk scarlet-red birrette (caps) have cast their final and deciding votes.

Tens of thousands of the faithful have gathered in the piazza (square), standing elbow-to-elbow, focused on a balcony that overlooks the masses, anxiously awaiting the verbal portion of the historical moment they have just witnessed.

HABEMUS PAPAM! We have a Pope!

Just like in the movie The Shoes of the Fisherman, this scene — with its concise, two-worded Latin pronouncement — really does play out every time the College of Cardinals — the body of senior ecclesiastical officials who provide counsel to the pope and who always dress with a hint of their trademark scarlet red — quickly converge on the Vatican from their respective religious outposts to cast their vote for the successor to the just-deceased pontiff — the Holy Father and God’s emissary here on earth.

The process of electing, announcing and anointing a new pope is a time-honored tradition full of centuries-old pomp and circumstance and religious symbolism. Once the new pope takes his place atop the Church’s hierarchy, the line of apostolic succession remains in tact and its nearly 2,000 year history turns another page.

It was Simon Peter of Galilee, one of the 12 Apostles, whom Christ determined had strong enough shoulders to serve as the rock upon which His church would be built. Since St. Peter, 264 other individuals have followed in his rather large footsteps — one serving multiple times to bring the actual pontificate total to 266. The current pope, Benedict XVI, is the bookend in the papal lineage.

A strange turn of events occurred this past Monday when Pope Benedict — Joseph Ratzinger of Germany — announced to the world that he would be stepping down from the highest office of the Church, effective at the end of this month.

No. 266 cited general health reasons for his abdicating the throne, an act undertaken only eight times previously in the two millennia reign of the papacy, the most recent dating all the way back to July 4, 1415 when Gregory XII left the Vatican on his own accord. 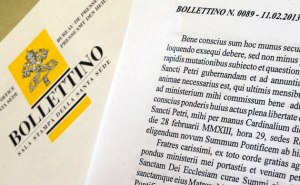 As soon as that resignation goes into effect — at 8:00 p.m. local time in Rome on February 28th — the election process for a new pope can get underway; but, this time around, there’s a slight deviation in the protocol. Since Benedict is alive, and assuming he will be when he leaves the Vatican, there will not be the official mourning period of nine days. Therefore, the cardinals, those that are eligible to vote, will be summoned to Rome, and a conclave should start immediately.

A Vatican spokesman said a new pope could be elected by Easter, which is March 31st. All cardinals under the age of 80 — 117 total — are eligible to vote. A two-thirds majority of the vote is required for that one, lone cardinal to rise to the role of the all-powerful No. 267. Should the voting be at an impasse after 30 ballots, then a simple majority in subsequent ballots is only required for election. 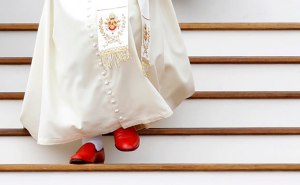 In analyzing how the voting might go, it’s important to know where the voting members of the College of Cardinals hail. The largest bloc, 61 votes, comes from Europe, followed by Latin America with 19, North America with 14, Africa and Asia with 11 votes each, and Oceania with just a single vote.

These 117 cardinals, much like Spiderman, only they’re real, will have great power and, with it, great responsibility in selecting Benedict’s successor.

The election of a new pope is a complicated matter for all those directly involved. These voting members of the College are now faced with the perennial two-part problem: Do they cast their vote for a young and healthy member of their ranks with the hope of a long papacy — much like Anthony Quinn portrayed in the movie and Karol Józef Wojtyła, Pope John Paul II, did in real life — or, will they opt for an older colleague who will rule briefly as a transitional, caretaker pope? Add to this dilemma, what role will Benedict play in the selection process of his successor? Surely he’ll have a say in this and influence the outcome.

Given as the reasons for his stepping down, Benedict cited his age, health and lack of strength to fulfill his mission in this ever complex, modern world.

And that raises yet another key issue for the entire College of Cardinals: Can the Roman Catholic Church, the largest global Christian organization with 1.2 billion followers, continue to be guided and molded by an absolute monarch? Or, is it now time for a more collegial management style, similar to that employed during the early days of the Church? 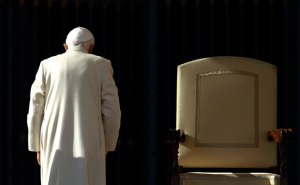 We should know by Easter who the new pope of the Catholic Church will be. Speculation on who and from where he will come is already underway as respected religious analysts — both inside and outside the Vatican — have begun their personal, but unofficial vetting processes.

The world will be watching for more white smoke spewing out of the stack just above the room of the conclave, signaling a new fisherman has become No. 267.

(All the photos used in this article are credited to today’s edition of IrishTimes.com)