Ski Trek Villabassa 2013 (STV), the 23rd edition of the annual gathering in the Dolomites of northern Italy by Yanks, Canucks and Italians, is officially over.

Oh sure, I could probably find these Tyrollean dishes down here in the Veneto, but it wouldn’t be the same. I’ll just keep these regional epicurean delights on the back burner until next year.

As they say in Hollyweird, “It’s a wrap!”

Hold the AWEs, but this post will be the final dispatch in a series of five articles I’ve written on STV 2013.

If you haven’t seen the previous four posts, feel free to click on the hats and read as many as you’d like. You can also check out the STV Facebook group page for more photos and comments from some of the other STVers.

Just like at the start of our fun-filled settimana bianca (white week), where we all gathered in the lobby and the adjacent fireplace-room of the Hotel Adler in Villabassa for high-fives and kiss-kiss-hug-hugs, we did the same at the end of our Trek last Saturday; but, there were more misty eyes vice smiling faces all around our group as we bid each other final farewells until this time next year.

During our seven-day “invasion” of the Dolomites, me and my fellow ski and snowboard bums AND “SLEDdog Millionaires” had plenty of weather challenges — mainly continuous snowfalls morning, noon and night for the better part of our stay. But, none of those heavy-laden gray skies dampened our spirits or forced us to endure cabin fever. Nope. We followed Pitbull’s advice and never stopped the PARRRRRRRR-TY. 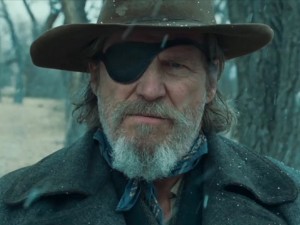 Just like U.S. Marshall Reuben J. “Rooster” Cogburn in True Grit, we “saddled up” and took what Madre Terra doled out, day in and day out. We went mano-a-mono with her, and never missed one single day of skiing-boarding-sledding nor all the après fun (imbibing and casual strolls around the nearby villages), and lots — I mean LOTS — of eating.

As the days weathered on (like craggy-faced Rooster over there), Ma Earth ended up blessing us with four days of freshly fallen skier’s gold — POWDER — followed by bright sunshine and breathtaking blue skies the remainder of the week that made it easy to gaze at those unique, panoramic, panettone-like, snow-covered peaks known as the Dolomites. 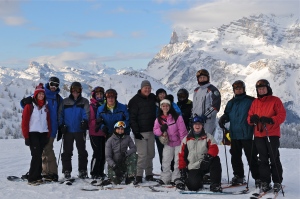 A DAY AT THE RACES

We crowned a new “king” of the downhill, as one of the members from the Italian squad (I–T–A–L–I–A!), affectionately known as Coach, took the slalom trophy, while T from Canada (Oh CA-NA-DA…) was the “queen” of the distaff side.

In the sledding competition, G-M of Team USA (U–S–A! U–S–A!) was quickest to the finish line for the guys, and M, also representing Old Glory, had her motor running with the sleekest sled of the gals.

And, the overall men’s and women’s combined slalom-sledding winners both came from the Bel Paese, as Coach and N — sans her spiked heels — brought home the gold for La Squadra Tricolore.

Yours truly finished fifth — FROM THE BOTTOM! Hey, I MEANDER along the cobblestone, not run along it, remember? Anyway, who cares. I came for the food, drink, laughs and camaraderie as much as I did for the skiing; so, it was a win-win for me.  I like to take my time when I eat, savor every morsel and sip; and, I guess I do the same when I’m on those two narrow boards heading downhill.

We all thoroughly enjoyed sampling the variety of great dishes prepared for us — about 21 per person — during the week.

A few of us hardly slept.

And EVERYONE had a great, great time.

It’s no wonder STV has endured for 23 years and counting. As one member of our group exclaimed, “Hip replacement be DAMNED, I’m going to Villabassa this year.” And, he did. And, he skied. And, just like Rooster Cogburn, he overcame and conquered. Talk about true grit.

Ski Trek Villabassa 2013. A great week for 50 or so really lucky souls. You should’ve been there. Maybe next year, okay? If so, you bring the GRIT, I’ll order the GULASCH.