Trapped inside my sketchy, cobweb-filled memory, from a mandatory English literature class that I attended when I was a young lad of just 15, are the only lines I can recall from Samuel Taylor Coleridge’s late 16th Century poem, Rime of the Ancient Mariner: “Water, water every where, Nor any drop to drink.” Supposedly, Coleridge’s poem was inspired by British Captain James Cook’s voyage of exploration around the South Seas and the Pacific Ocean, which included Queensland, Australia where I recently vacationed.

So, what’s the connection between me and Sammy the Poet? Well, Orna O’Reilly, my significant other and fellow blogger, and I fled winter back home to enjoy a brief, second summer along the Sunshine Coast, and every morning for 24 straight days I would stand on the balcony of our ninth floor apartment at the Duporth Riverside complex in Maroochydore and gaze down and out at the panorama of the Maroochy River flowing into the Coral Sea and quietly remark to myself, “Water, water everywhere.” 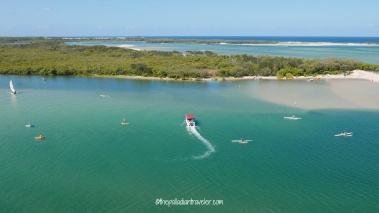 My daily ritual began at around 6:00 a.m. when the “early to bed, early to rise” locals sped past my sleepy eyes aboard kayaks, canoes, stand-up paddle boards, pontoons, sail and motor boats and jet skis. Although delighted, it really pained me to watch as every passing day I would chomp at the bit to join in all that fun-loving water traffic below.

My wish finally came true as Orna and I and the rest of our party of six slipped into a flotilla of kayaks and a lone Canadian canoe and were expertly guided along the outer banks of the Maroochy by Neil Oldham, a master kayaker and pro guide for Sunshine Coast Sea Kayaking. 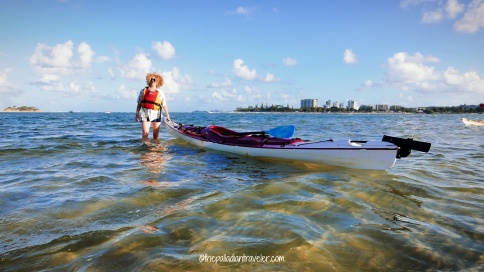 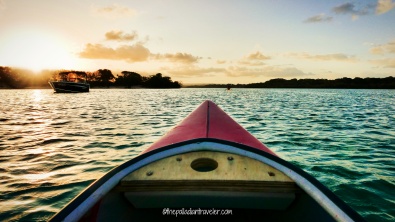 Our sunset glide took us around Goats Island, past Pin Cushion Island, along Mudjimba’s North Shore and down Stingray Alley, not to mention a few tricky spots where the low tide left us a bit high and dry. At the midway point we beached our craft and cracked open a few cold ones. A tip of the paddle to Neil for organizing this really cool experience, my first ever since coming ashore in Oz. 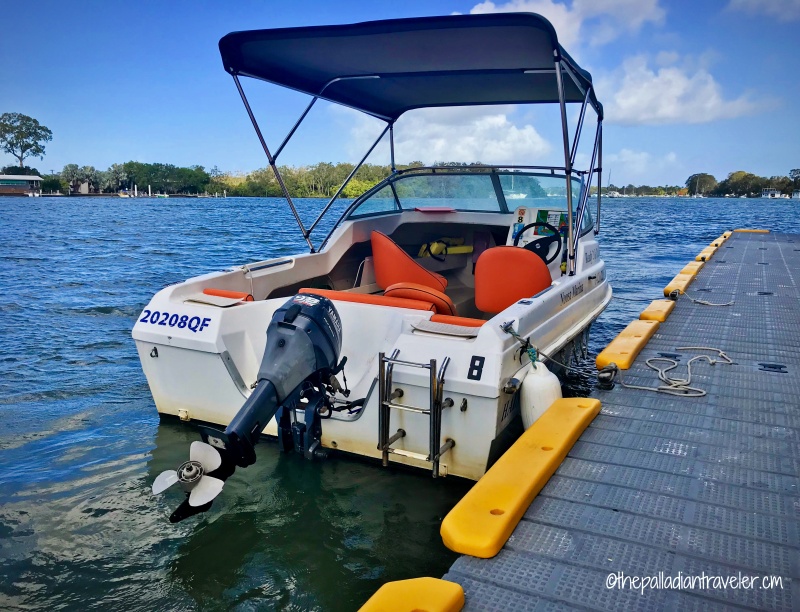 Now sea, actually river worthy, I convinced Orna to give it another go and we rented a little half-cabin cruiser from Ready 2 Go Boat Hire at the Noosa Marina in Tewantin for a four-hour float up and down the busy Noosa River. Not the best of craft, we pretty much bobbed and weaved our way in and out of heavy traffic all day long, trying desperately to avoid all the wakes created by an armada of larger craft zipping around our “little boat that could.”

All the way down to where the Noosa meets the mouth of the Coral Sea, with a stop midway in the Noosa Sound to grab a couple of cold ones and an egg salad sanger (sandwich), we returned back to the dock at Noosa Marina without incident, but with a promise to each other that next time, in the words of Roy Scheider from the movie Jaws, “We’re gonna need a bigger boat.” 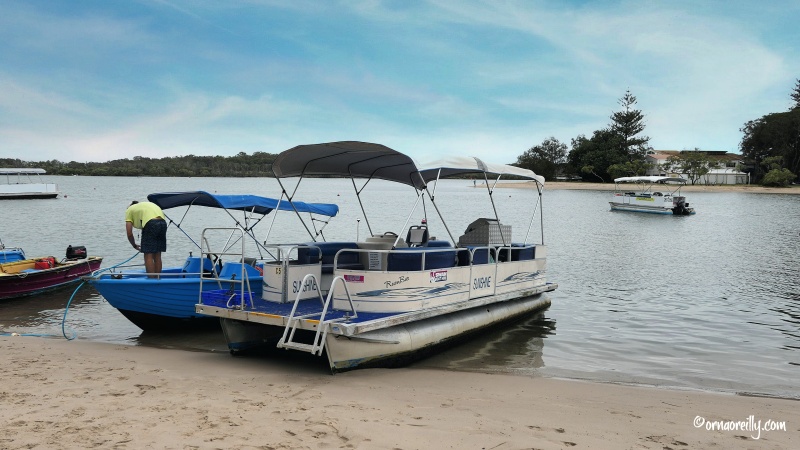 If bigger is better, then by golly this time around we’ve finally got it covered: a six-person pontoon boat, complete with an on-board barbie, that we rented from Swan Boat Hire in Maroochydore for our third and final self-drive cruise.

Shoving off from the banks of the Maroochy, our crew of four headed up-river with hardly any traffic at all. Keeping the craft between the red and green buoys, I guided our craft straight and true just like Columbus over the ocean blue. On our return leg, we cracked a right and cracked open another cold one and went quietly up Petrie Creek until our clock struck “head back to GO.” 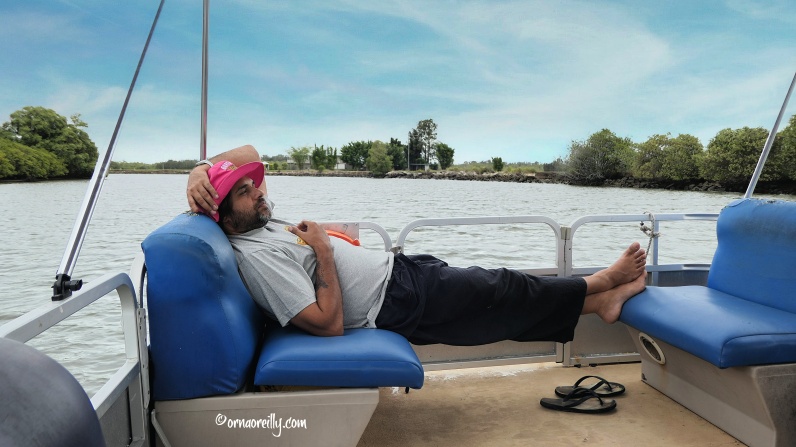 Our self-drive antics on water now over, there’s still one, atop-the-wake activity left on our Down Under to-do list. It involves eating and drinking while someone else steers the boat.

If you book only one cruise while staying along the Sunshine Coast make it a sunset dinner cruise aboard the Noosa Cruiser Restaurant & Bar (NCR&B), rated no. 1 by TripAdvisor. 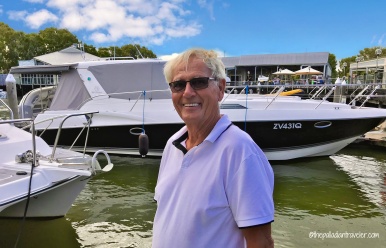 Waved through the security gate at the Noosa Marina in Tewantin by Ron, the owner/operator of the boat, we make our way on board and are led to our table by Dan, the head waiter. Quick on the draw, he has us twisting the top off the first of several bottles of chilled Aussie Pinot Gris in no time.

As the sun begins its descent, Skipper Greg puts the cruiser in glide and away we go, up the Noosa to the edge of Lake Cooroibah and back, passing by Sir Richard Branson‘s private Makepeace Island along the way, where exclusive and luxurious accommodation awaits 22 privileged castaways. Say “hey” to Sir R for me, will ya? 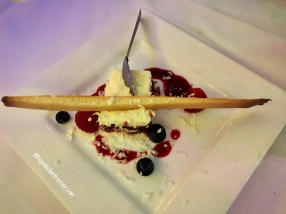 And, our white tablecloth service aboard the NCR&B? How about Chef Tristan’s appetizer plate of locally fished oysters, king shrimps, lemon pepper calamari and an avocado and mango salad. Our main follows, a pan-seared darn of Tasmanian Atlantic salmon. And our floating feast ends with a fruity and creamy dessert. Mmm.

What a fun way to spend sunset aboard the Noosa Cruiser Restaurant & Bar. Me and my mates handled the merriment, Skipper Greg piloted the boat and Uber drove us home safely. 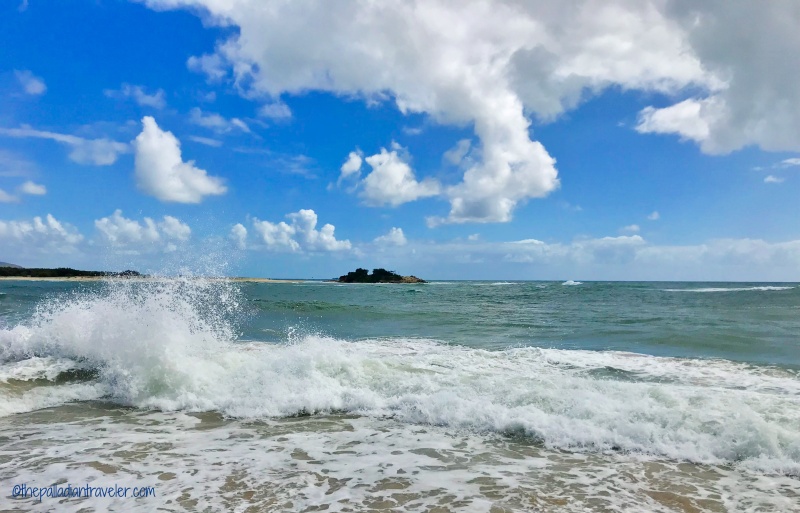 Australia boasts 21k+ miles of jaw-dropping coastline and some of it winds its way around the Sunshine Coast. Join us next time when we’ll trek along the Costal Pathway to have a look at some of the OMG beaches and, no doubt, leave a few footprints in the sand before our final hooroo (goodbye) to the land Down Under.