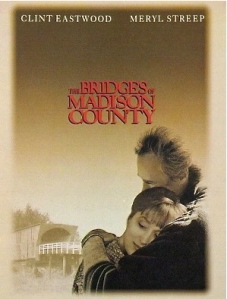 The book tells the story of a lonely Italian war bride (Francesca Johnson) who engages in an adulterous affair with a National Geographic photographer from Bellingham, Washington (Robert Kincaid) who has come to Madison County, Iowa in order to create a photographic essay on the covered bridges in the area.

The Bridges of Madison County was made into a 1995 film of the same title, directed by and starring Clint Eastwood as Kinkaid and co-starring Meryl Streep as Francesca.

But, Madison County, Iowa is some 5,000 miles away, as the old crow flies, from where I’m standing right now — in the Centro Storico (Historical Center) of Vicenza, Italy — and there’s not a row of corn in sight.

Actually, what’s ACROSS is a nice easy stroll around this three-river city to take in all eight of her bridges that dot the Centro Storico.

Enjoy the short video of bridges that are very, very far from Madison County — both in distance and time — but truly worthy of a National Geographic essay.