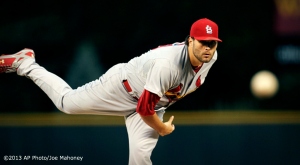 If you’re a fan of Major League Baseball (MLB), you’re either one of the lucky ticket holders in the stands or, like me, a less fortunate glued to the one-eyed monster (TV, computer, handheld, etc.) cheering on your favorite team as the race to the World Series is now underway with postseason play.

It’s no secret that I swapped my hometown St. Louis Cardinals ballcap for a Borsalino when I decided to pack my bags and hang my capello in Vicenza, Italy, the City of Palladio, far from the banks of the Muddy Mississippi; but, I never lost sight of my beloved, high-flying Redbirds.

During the 162-game MLB regular season schedule, I bleed StL red about as often as I drink vino rosso; so, for the next couple of weeks I’ll put the “B” away and sport my Cardinals’ cap for as long as skipper Mike Matheny’s National League Central Division champs stay in the hunt for what I hope will be a RED October and another Fall Classic trophy.

The quintessential ballpark food in the U-S-of-A is a hotdog washed down with a plastic cup of the home team town’s finest suds. But, from over here in the land-of-vowel-ending-words, I’ll maintain my fanatic demeanor with a homemade flatbread pizza. And, I plan to prep a different one for every game during the Cardinals’ postseason run and pair the pies with different wines.

Now, if you’ll cue the public address announcer for the game-1 introductions of the Cards-Pirates National League Division Series matchup…

“Leading off our squad of Red October Pizzas is The Matt Carpenter Pesto-Pomodorini-Grilled Chicken Pizza.”

This pie is one large Piadina Romagna with a base coat of creamy Stracchino cheese and a generous coat of Pesto Genovese. The flavorful goodness below is topped with grilled chicken, cherry tomato halves and freshly grated Parmigiano-Reggiano.

And we’ll savor each bite with a nice Sauvignon from the Alto Adige region of Italy: Sanct Valentin Alto Adige Sauvignon DOC from the Kellerei St. Michael. It’s a zesty white with a drinkability well above average, just like Matt Carpenter hits. 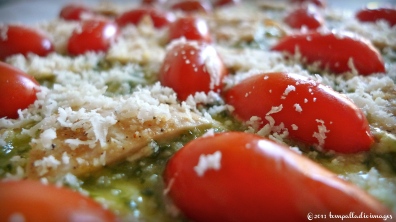 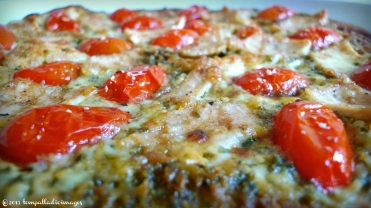