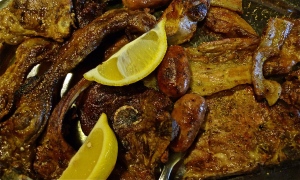 Growing up in the U-S-of-A and raised Catholic meant meat of any kind on Fridays was a no-no. We had to bite the bullet and suppress our urge for the standard Midwestern meat-and-potatoes fare that we normally ate the other six days of the week.

Instead, the parents in our parish would man the deep fryers for a good ‘ol fish fry, and paper plate the once-frozen tiles of white fish transformed into something edible, add some spaghetti and cole slaw and send you on your way, less the six bits ($.75). All the proceeds, after paying off the delivery truck for the fish AND the beer — Hey, we’re talking Catholics in the 50s — went right back into the parish to support the grade school and its baseball, basketball and soccer teams.

Ah, fish on Fridays. Such memories. It seems as if it was only yesterday. OMG. It was! 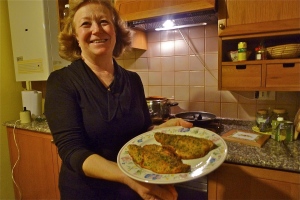 I guess there’s really no escaping the no-meat-on-Friday ritual, even if it is now partially extinct in the eyes of the Church, except on Ash Wednesday — the start of Lent — all the Fridays during the Lenten season, and Good Friday, just before Easter.

But, some religious traditions just die slowly, and Bella Italia is no exception. Lot’s of people still use the old Church tradition of year-round “meatless Fridays” simply as an excuse so they can continue eating seafood on Fridays. And my old friend, and the new one — the Double-Ls — still do their “fish fryin'” on Fridays.

And, what a “fish fry” it was. All fresh, no frozen gills-of-the-sea, selected earlier in the day at one of the fish markets around town.

When I asked what some of the dishes she prepared were called, Lore, our hostess for the evening, simply replied, “Modo mio” — My way. Okay. You’re the boss.

What a delightful and plentiful evening it was.

The dinner continued with oranges the size of grapefruit, and ended with glasses of Prosecco and several plates of frittelle — little deep-fried sweets that occupy most of the shelves in the glass cases of Italian pasty shops during Carnivale (Carnival), the party-til-you-drop period that’s several weeks long and concludes 40 days out from Easter.

These little bites of heaven remain on sale, or prepared in homes around the country, until Martedi Grasso (Fat Tuesday) or Mardi Gras, the day just before Ash Wednesday, and then they just vanish.

On my way out the door, Lore handed me a CARE package of some of the remaining fritelle, reminding me that I have to finish them off by sundown of Fat Tuesday.