This week’s photo challenge is to capture one’s fair city in such a light that it documents the living space and how people adapt their environment to certain needs and vice versa. In short, to capture the essence of URBAN. Let’s give it a go. 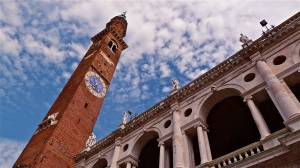 I used to be SUBURBAN, but now I’m, well, URBAN.  I’ve been enjoying my life as a transplanted Yank in the “City of Palladio” on and off for almost 19 years, the last as a bona fide, card-carrying resident. As such, I can now officially claim “city slickership” in Vicenza, Italy. 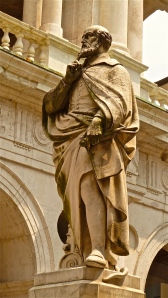 Not quite at the level or stature of Andrea Palladio, the 16th century master of harmonious spatial architecture known as Palladian design, I have, however, placed a few bricks on top of each other and applied a bit of mortar in my day. And maybe that’s why I’m so awestruck by Sig. Palladio’s work and the legacy he left behind in the city that claims him for its very own.

A UNESCO World Heritage site, Vicenza is one of the crown jewels of Italy’s Veneto region. Admittedly, without the Palladian influence, tour buses would simply pass us by and head to Verona to the west or Venice to the east, UNESCO would turn a blind eye, and I would not be blogging under the moniker of The Palladian Traveler. 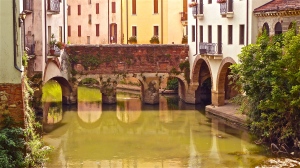 Through Andrea Palladio’s incredible body of work, the light shines bright around the Piazza dei Signore, along the Corso Palladio and its connecting side streets, in the hills of the Colli Berici and well beyond. All along her cobblestone streets and covered archways, tourists from around the world come to marvel at the quantity and quality of raised elevations that bear witness to “designed by” or “influenced by” Palladio.

The city, the historic center that is, has stood the test of time, and remains pretty much intact just the way it was back during the Italian Renaissance. Cars and buses have replaced riders on horseback, horse-drawn carts and carriages, and trollies; but to maneuver the narrow streets and alleyways, locals rely on small, low-emission diesel cars, propane (autogas) fueled public transportation, motorcycles, scooters, bicycles and, like me, the easiest mode of transport, on foot.

There are lots of one-way and pedestrian-only streets, and roundabouts vice traffic lights to curb vehicle congestion, too. Car parks have gone underground where they can, and vacant, above-ground spaces remain at a premium. And, the city engineers are always hard at work repairing and restoring the old to as good as new.

I join my fellow city slickers and shop the small mom-and-pop grocery stores, artisan shops and open-air markets several times a week, only buying what I need for the moment so as to lighten the load for the stroll back home.

If you come to Italy, specifically the Venento region, and are contemplating opera under the stars in Verona and a romantic gondola ride down the Grand Canal in Venice, you really should consider a side trip in between to Vicenza, the City of Palladio. She’s really quite urbane.